1944 was the fifth year of the II World War (jointly started by Germans attacking the Poland on September 1st 1939 and joined by Russia attacking the Poland from the East on September 17 1939). Despite the defence military pact with Great Britain and France that Poland had at that time, these countries didn’t fulfill its obligation to step-in and militarily help the Poland by joining the conflict. Instead they stopped short on “declaring the war” then silently sit down and watch for German and Russian atrocities in Poland for the next years (over 5 millions Poles - including 2.3 millions Polish Jews were executed, murdered or send with a death sentences to German Concentration Camps built by Germans in occupied Poland). So did the World by passively watching and turning its back to these daily mass murders. If in solidarity, all so called “Fee-World” states could easy defeat these aggressors in 6 months and end the War with minimal casualties and with no further Russian and communist domination over the half of the World. 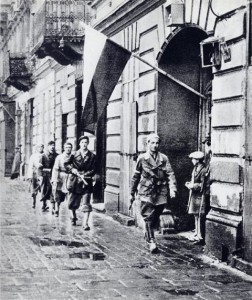 Instead they’ve waited for years and the war ended with over 50 millions of victims, with loss of half Europe to the Soviet Empire and related to that communist domination and occupation and further thousands of victims and with politically re-shaped Europe which has never healed its wounds including many countries still under the domination and terror from the old post-communist powers (Patrol of Lieut. Stanisław Jankowski ("Agaton") from Batalion Pięść, 1 August 1944: "W-hour" (17:00), Wikipedia).

The Polish Army on the West (the army based in Great Britain and formed from escaped Polish Soldiers, Pilots, Airmen and Sailors) was the 4th largest Allied army in Europe that participated in the War and defeated Germans (after Soviet Union - former ally of Germany, USA and Great Britain). As we all remember that were also the Polish Pilots who made the turning point in defeating the skies over the Britain and helped to re-gain the control when Brits were loosing it. 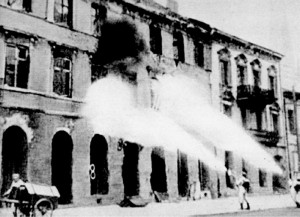 Ironically, while still using the Polish Army as an important ally, while fighting Germans arm to arm, the “Fee-World” started to hold conspiracy talks with Joseph Stalin (Teheran Conference in 1943 and Yalta Conference in February 1945) with intention to handle over to the Soviet Union its Polish Ally together with a half of the World (German Brennkommando burn Warsaw; photograph taken on Leszno Street, Wikipedia).

The Yalta Conference stamped this deal in 1945. In effect, the Poland and half of the Europe was under the communist terror and occupation for over 45 years and there is still no end to this to that day (post communist circles rule and control many of the former Soviet-blocks countries, corrupting powers, destroying their economies and weakening states and nations). 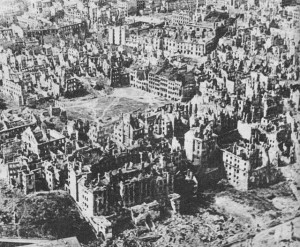 As a symbol of that dirty deal, the Polish Army was excluded from the 1945 World War II Victory Parade in London, (I repeat - this was the 4th largest Allied army in Europe that participated in the War and defeated Germans). In opposite - the Red Army (which jointly started the II World War on September 17 1939) was a part of that parade (Ruins of Warsaw. After the Uprising, 85% of Warsaw was destroyed, Wikipedia).

However, the history teaches that it didn’t teach anyone and anything. Today we have the exact situation in Ukraine. The “Fee-World” is playing down the war in Ukraine, calling that “domestic conflict” or an activity of “terrorists”.

Yeah. Why don’t we wait again, until this ends in growing conflict that would need another 50 - 100 million casualties and the total destruction of our Wolrd? Why not? Someone said the conspiracy does not exist?