"Independence Day observances are a symbol of the historical continuity of our nation; we are returning to the past to build a better future", President Andrzej Duda said on Thursday evening, the eve of Poland's Independence Day.

"During the partition years, for over a hundred years of enslavement, several generations of Poles carried the yearning for a free homeland in their hearts," President Duda said in a televised address to Poles.

"When these dreams of free statehood transformed into acts of insurgency, hostile armies bloodily quenched such independence outbursts. Thousands of Poles condemned to death, deportation and persecution never lived to see the day of their desired freedom. And this day came in 1918, when an independent Polish state was reborn from the ashes of a war-ravaged Europe". 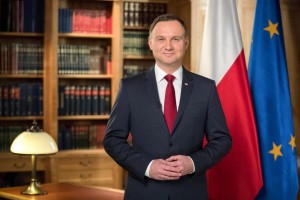 "The day of November 11 was instituted as a National Day of Independence, as it was then that the Regency Council conferred the command over the Polish armed forces to Jozef Pilsudski".

"The anniversary of the regaining of independence by Poland was celebrated very solemnly in the period between the two world wars. There were state observances as well as celebrations in the streets and in homes. World War Two, the German occupation and communist enslavement broke this tradition. The aim was to erase the significance of the events of 1918 from social awareness. The aim was to make Poles forget about independence," President Duda said (photo Krzysztof Sitkowski / KPRP).

"Today, in a free country, we are returning with pride to the pre-war tradition, thus to express our belief that our Poland is the continuation of the country whose construction was begun by the generation of the Second Republic of Poland", the president said.

"Tomorrow's Independence Day observances are an important symbol. A symbol of the historical continuity of our nation. We are returning to the past to build a better future," President Duda said (PAP).