On September 8th, 2014 the Polish Gazette Club in Ottawa and the Ukrainian National Federation, Ottawa-Gatineau hosted a dinner and presentation by special guest from Poland, Tomasz Sakiewicz, Editor-in-Chief of the Polish Gazette and TV Republica.

This was an informative evening to learn first hand how this Polish journalist and author has been a key support to the Ukrainian Government in its efforts to denounce Russian sponsored terrorism and separatism in Eastern Ukraine as well as the illegal annexation of Crimea. 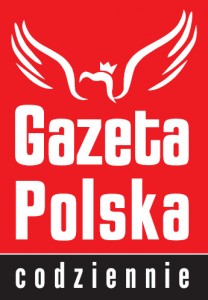 I represent a media group and a social movement that are involved in helping Ukraine. Among these media is a daily newspaper “Gazeta Polska Codziennie”, Poland’s oldest weekly “Gazeta Polska”, which has been published for almost two hundred years, monthly magazine “Nowe Panstwo”, and news portal “Niezalezna.pl”, as well as associated with it online TV channel, which has one and a half million viewers. I also represent here the TV channel “Telewizja Republika” established by journalists of different backgrounds. Under the auspices of the weekly “Gazeta Polska”, we have founded in Poland and around the world four hundred clubs that gather together very patriotic and public-spirited citizens of our society. We are essentially financed by our readers. We also receive donations to our Foundation of Independent Media (Fundacja Niezalezne Media). And it turned out that these modestly financed media could play an important role during the Maidan Revolution and they still play their part while the war is going on. The concert on Kiev’s Independence Square (Maidan ) organized by our TV channel “Telewizja Republika”, which was interrupted by an attack of government forces, coincided with key moments in the struggle for a change of power in Kiev.

Journalists of our media were on Maidan; some were wounded. Every day, from the outset of the revolution, they have been covering the war in Ukraine. We organize demonstrations of support for the Ukrainian people struggling for freedom and we also arrange financial assistance. In recent days, for example, we supported the Polish humanitarian convoy.

Besides, we demand from the Polish government to provide the real assistance to Ukraine. This aid must range from money to arms deliveries. We feel obliged to require such help on the grounds of our common tradition of fight against totalitarianism and belief that only by joining together can we defend independence:

On Monday, September 8th, 2014 at 12 noon Polish Gazette Club Ottawa with EuroMaidan Ottawa, in participation with the Ukrainian National Federation Ottawa-Gatineau, the Baltic Federation in Canada and the Central and Eastern European Council held a Rally on Parliament Hill, Ottawa, Ontario, Canada.

The rally was to raise awareness of the ongoing invasion of Ukraine by Russia, and demonstrate that Ukraine is not the first victim of Russian oppression and will not be the last.

Also, the following five examples of acts of terrorism were mentioned during the rally: Invasion of Georiga – 2008, Smolensk Crash of Polish Air Force One -2010, Annexation of Crimea and War in Ukraine – 2014, Downing Flight MH17 – 2014. 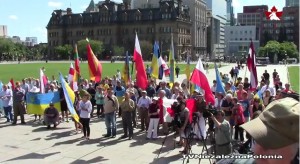 Protestors called on the Government of Canada to provide more bilateral assistance to Ukraine, including decisive sectoral economic sanctions, particularly against the financial, defence and energy sectors; increased political isolation of Mr. Putin; and real military support, including arms, vehicles, surveillance equipment and other support for the Ukrainian armed forces to defend sovereign Ukrainian territory against Russia’s proxy war and recent direct invasion.

Honourable David Kilbourn, well known human rights activist and former Parliamentarian said in his speech: "...if Ukraine become a Nova-Russia and the West collapses, it will not be because of Russia’s physical strength but because of our mental weakness".

The keynote speaker from Poland, Tomasz Sakiewicz, Editor-in-Chief of the Polish Gazette and TV Republica said: Ladies and Gentlemen,

Every day dozens of people are killed in Ukraine. The war has turned into Russia’s open aggression against the nation that half a year ago has chosen independence. 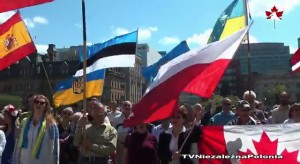 Russian aggression in Ukraine is not the Moscow’s first military action in recent years. In 2008, Russian tanks rolled into Georgia trying to overthrow the government and to subdue the whole country. In the end, only a part of the Georgia’s territory was seized. The Kremlin was stopped due to the international action – mainly due to decisive steps of the five Central European leaders brought to Tbilisi by the Polish president Lech Kaczynski. At that time, Moscow realized that in the center of Europe was growing a great power which was able to stop imperial ambitions of the Kremlin.

This power was constituted by the agreement of one hundred million people having diverse cultures, respect for their traditions but, above all, of people who were able to join their efforts against the invaders from the East. No wonder that the main proponent of this agreement Polish President Lech Kaczynski was seen as a deadly threat by Moscow.

Flying to Smolensk, Russia on April 10th, 2010, president Kaczynski was drawn into a deadly trap. Along with a hundred representatives of the Polish state, he wanted to honor the memory of thousands of Polish POW’s murdered in Katyn massacre in 1940. As a result of Russian plotting, the president and the members of the delegation accompanying him were almost completely devoid of security measures necessary during such visits. The research and investigation carried by the independent scientists have shown that the aircraft with the Polish delegation on board exploded just above the ground. The Russians confiscated the black boxes and the wreckage of the aircraft and so far, even four years after the incident, Poles cannot reclaim them. The corpses of our leaders were desecrated and the victims’ families were intimidated. That brings to our minds the tragedy in which nearly 300 people were killed aboard Malaysian aircraft attacked by Russian terrorists operating in Ukraine. Today, we cannot wait any longer. We have to stop Russian imperialism before the war spreads the other countries. Russia must be completely isolated from the world until it ceases the aggression. Ukraine must be provided with the real financial and military help. Let’s give them money and weapons so that they will be able to protect all of us against another global tragedy: