There are albums about Cracow that you reach for with joy - of returning to your childhood days or even times before your birth. There are works of photographic prowess, or the ones telling the city’s past with pictures focusing  on its social aspect… Today is the time to add another album to the vast collection, alongside the creations of Ignacy Krieger, Franciszek Klein, Henryk Hermanowicz or Henryk Tomasz Kaiser – “The Cracow Millenium” by Mr. Adam Bujak, as it both should be included and is worth of introducing.

In the introduction of the album, by Mr. Krzysztof Czyżewski, the city’s history is described in a nutshell. This part is an astonishing reconnaissance through Cracow’s past and the works of its architecture and art and learning about it is beneficial and worth the time.

Among the photographs, one can discover places less known, or completely inaccessible, like cloisters of enclosed religious orders, one might return to the places from childhood - in my case, the churches of Corpus Christi and St. Nicholas, one shall become astonished by the breathtaking angles and takes, or the beauty of natural light at dawn and dusk. 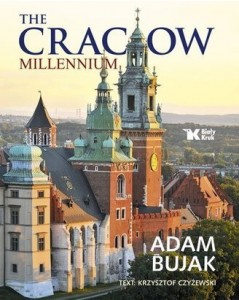 Truly captivating are the photographs in which Mr. Adam Bujak captured a moment. A one of a kind moment. Be it a Holy Mass, a funeral, monthly celebration of Smolensk Catastrophe (commemorating the great tragedy in which President Lech Kaczyński lost his life), a prayer, a procession, or fun that the students are having at their festival, the Juwenalia. The conjunctions of pictures are what fascinates the most, e.g. the comparison of a museum of wonderful art with a museum of modern technology. Or an incredible monument and a hideous – though, in this case, politically quite appropriate – sign on it.

It’s worth to spend a moment of thought over, for example, the sarcophagus belonging to the bountiful polymath Józef Ignacy Kraszewski in the Skałka Monastery, the enormity of Stanisław Wyspiański’s stained glass windows, the wonderful examples of Art Nouveau style in Jama Michalika café, or the fate of the sculptures of Twelve Apostles, when you still have in mind those original ones, lying, mutilated by the previous, communist regime, in the garden of Collegium Broscianum, the place where we were once studying philosophy, geography, sociology in the 1980s.

One can spend hours over this album, taking joy from it and becoming emotional thanks to it. One can also write about it for hours. And, for certain, one should definitely have it and… spread the news about it around. God, grant us a wise local government, Polish diplomacy and cabinet – only then the beauty of Cracow, in many languages, will be granted to thousands… Maybe that shall occur this year, maybe the next. Cracow, urbs celeberrima, is worthy of this effort.