During ceremony of the 70th anniversary of the European Parliament, the European Conservatives and Reformists made cutting criticisms. Speaking on behalf of the Group, Chairman Prof Ryszard Legutko pointed out that in the strict sense it is only a quasi-parliament, alienating millions of voters. 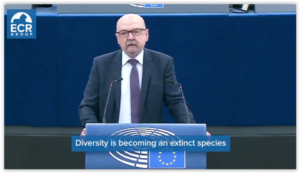 The Parliament has abandoned the basic function of representing people. Instead, it has become a machine to implement the so-called European project, thus alienating millions of voters. The Parliament has become a political vehicle of the left to impose their monopoly with their fierce intolerance towards any dissenting view. No matter how many times you repeat the word ‘diversity’. Diversity is becoming an extinct species in the European Union and particularly in this chamber.

The Parliament is a quasi-parliament because it rejects the essential principle of parliamentarism, namely accountability. The deputy – let me remind you – is elected by the voters and must be accountable to the voters that elected him. Not so in the European Union. The idea that, say, Spanish, German, French, et cetera, deputies accountable to their own national electorates can dictate something to, shall we say, Hungarian society or any other society to which they cannot be held accountable and which cannot take them to task is simply preposterous.

Call it what you will. But democracy, it is not. To sum up, the Parliament represents the demos that does not exist, works for the project that ignores reality and law, shuns accountability, turns its back on millions of people and serves the interest of one political orientation. And this is just the tip of the iceberg. Having said that, ladies and gentlemen, I rest my case.”